The 1980s and the October Occupation

As Smith College became a more diversified campus with a growing number of women of color, cultural organizations representing these groups increased. In the 1980s the BSA shared space in the Mwagi Cultural Center with Nosotras, ADA, ISO, KSS, SASA, and Ekta. Cramped quarters and the difficulty of scheduling meetings and events by all the groups led the BSA to petition the College administration for space of their own.

Jill Ker Conway, president of the College from 1975 to 1985, had sympathy with the BSA, but space needs were tight on campus and efforts to find a new home for the BSA were stale-mated.

Also, the BSA led the charge against changing the name from the Mwangi Cultural Center to the Third World Center. The BSA argued that the Center was first and foremost for African American women and that its history should be reflected in its physical environment. 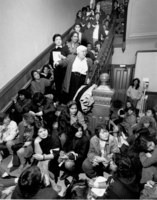 By the late 1980s tensions between the BSA and other cultural organizations and the College administration culminated in the October Occupation of College Hall in which the other cultural organizations demanded a space of their own. After a week of negotiation, then President Mary Maples Dunn signed a document that legally bound the College to create individual spaces for all of the organizations, including the BSA. In 1990 UNITY House was created on Bedford Terrace.