Even though the social and cultural climate in the United States, and Northampton, Massachusetts, towards African Americans was not always positive, African American women did have their allies on campus.

In the early 1900s Julia Caverno, a professor of Greek, assisted women of color with living arrangments. She opened her home to Otelia Cromwell and Carrie Lee while the students found long-term housing of their own. 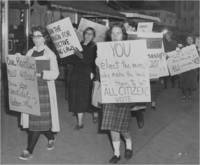 Members of the religious organizations on campus during the civil rights movement of the 1950s and 1960s found ways to contribute to improving race relations through a program called INTERRACE, which provided tutoring and scholarships to African American high school students and assistance with preparation of college applications.

President Thomas C. Mendenhall was aware of the small number of students of color at Smith and as early as 1961 sought ways to increase their numbers. He wrote a letter to a recently graduated African American alumna, asking how Smith could encourage more southern African American women like herself to apply. While we have no evidence in the College Archives that she replied, it is important to note that the College was thinking about increasing the number of women of color on campus. 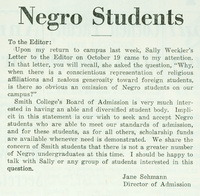 Smith College Director of Admission Jane Sehmann wrote this letter to the student newspaper in reply to an earlier student letter asking why "is there so obvious an omission of Negro students on our campus?" The College also participated in an "Ivy League Talent Search" where Smith along with other Ivy League institutions joined in a concerted effort to increase their number of minority students.