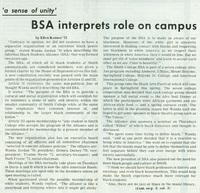 As part of its mission statement, the BSA states that its purpose was: "To provide a cultural and social organization which will establish for its members a sense of unity and identity within the smaller community of Smith College while at the same time emphasize their common interest in, and relationship to, the larger black community of the nation." (The Sophian, 12 December 1968)

The BSA was profoundly aware that unity and identity were important for African American women on Smith's campus--and that an extended community beyond Northampton was important for their cultural, social, and political well-being. Many of the activties and programs that the BSA has been involved with over the years address these issues.