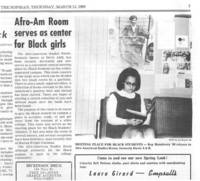 By the late 1960s the number of African American women on the Smith College campus increased to roughly 1% (27 students) of the entire population. By 1971 the number increased to 5.2% (167 students of color). A desire for a place to study and socialize led to the creation of the Afro-American Room on the third floor of the Davis Center.

As noted in this article from the Smith College student newspaper dated 13 March 1969, the space was a "convenient central meeting place for Black Students in this widely separated campus."

The rooms served as library, office, and meeting place for the BSA. Official business wes held here as well as mixers and receiptions. 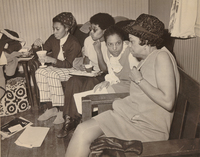 Shown here is a reception for Marion W. Edelman, the founder of the Children's Defense Fund, a non-profit advocacy agency for children promoting the educational, midical, and social welfare of children in the United States.