Born in Washington, D.C., in 1874, Otelia Cromwell was the first of six children born to Lucy McGuinn and John Wesley Cromwell, a journalist, educator, and the first African American to practice law with the Interstate Commerce Commission. Otelia Cromwell’s life and work was characterized by a deep sense of justice and responsibility toward others, a quality that was reinforced when her mother died in 1886 when Otelia was 12, leaving her in charge of her younger siblings. 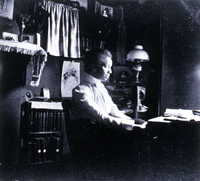 After graduating from the Miner Normal School, Otelia Cromwell taught in the Washington, D.C. public schools for several years. She transferred from Howard University to Smith College in 1898 and graduated from Smith in 1900, living off-campus during the two years she attended. 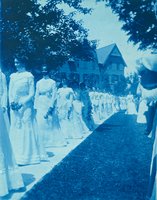 She returned to teaching for a number of years, and then resumed her education, receiving a M.A. from Columbia University and a Ph.D. from Yale University in 1926. Cromwell was the first African-American woman to receive a Yale degree. She soon became professor and chair of the department of English language and literature at Miner Teachers College in Washington, D.C. 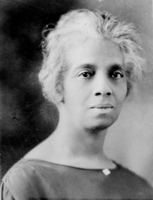 Cromwell remained at Miner Teachers College until her retirement in 1944. A distinguished scholar and teacher, she authored three books and numerous articles including Readings from Negro Authors, for Schools and Colleges, the result of collaboration with Eva B. Dykes and Lorenzo Dow Turner. It was one of the first collections of its kind. She received an honorary degree from Smith College in 1950. 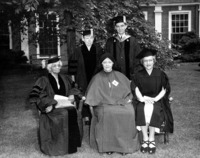 After her retirement from teaching, Cromwell accomplished her most significant scholarly work, The Life of Lucretia Mott, the Quaker abolitionist and women’s rights activist. It was published in 1958 by Harvard University Press and continues to be cited by contemporary scholars. Cromwell passed away in 1972 at the age of 98.