A New Home for Art and Art Studies 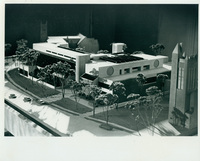 In 1968 planning began for a new fine arts complex. At that time every area of the visual arts at Smith needed more room. The number of art majors was growing, and new art studies, such as photography, needed appropriate studio facilities. In addition, the library was nearly out of space, and the museum collection was burgeoning as well.

While there were those who wished to keep the original arts buildings, it was decided that an entirely new complex would be built, integrating all the activities of the fine arts under one roof. By 1969 a design had been settled upon, and the stately Victorian Hillyer art building would give way to John Andrew's decidedly modern construction.

The new Fine Arts Center opened in 1972, but within 25 years a complete renovation was already in the works. Once again the changing needs of art study were taken into consideration, as well as a more dynamic view of the relationship between the building and its surroundings. 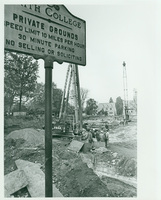 The stately Hillyer building was razed to make way for the new complex.  Three of Smith's other classic buildings were also demolished: Graham Hall, Gateway House, and Tryon Hall, the first museum building. St. John's Episcopal Church can be seen in the background. 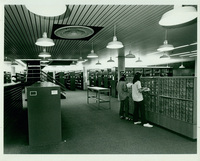 For a decade before the digital age commenced, the card catalog was still the focal point of research in the library. Using the stairs to orient yourself, see how the library has changed in the years since this photo was taken.

Ways of Learning
Some aspects of art study have changed radically over the last century, and some not so much.   Prior to the digital age, preparing for an art history exam required sitting or standing in a crowded room, memorizing hundreds of printed reproductions of the world's great works of art.  Today, students can view those works and millions more on their own computers through digital databases.  By contrast, a century of time has not changed the general appearance of the art history lecture hall: at the beginning of the both the 20th and 21st centuries, seating and a wall on which to display images are the only requirements.

10.  Photograph of "The Wall," 1984
Art history students press into the image study room to study for the final exam, jostling around to share views of major works of world art.  This display was known, with a mix of fondness and dread, as "The Wall."

11.  Photograph: Image Study Today, 2009
Digital databases enable students to study art individually, and in any location on campus that they choose.

12. Photograph of Graham Hall, c. 1910s
The original Graham Hall, built in 1910, contained faculty offices and classrooms, including this impressive lecture hall.   Graham Hall was one of the buildings demolished in 1970.  However, we can still get an idea of the grandness of these ceiling rafters in the Mary Maples Dunn conference room in Pierce Hall today.  The seating is similar to what is still in John M. Greene Hall.

13.  Photograph of Graham Hall, 2009
For all its modernity, the Graham Hall lecture room of today (in its 2002 incarnation) has the same general amenities as the original: chalkboard, image wall, speaker's podium, and projection equipment.


A Center for Studying and Creating Art


How We Study Art
The central theme in the chronicle of art buildings at Smith is the need to construct suitable spaces for the study, creation, and display of the visual arts.  Each chapter in this ongoing story requires a rethinking of how we do art.  The addition of new disciplines to the curriculum creates different requirements for the use and design of space.  New technologies and digital environments challenge our ideas about how we use that space.  Although we increasingly spend our work and study time in the virtual world, there will always be a need for the tangible in the visual arts.  Going forward, we will need to maintain a balance between embracing new technologies while at the same time preserving the more traditional ways of learning about and creating art.

The Fine Arts Center: A History
The first home for the fine arts at Smith was the Hillyer Gallery, opened in 1882.  Designed by Peabody and Stearns, the same architectural firm that built College Hall and Pierce Hall, the Hillyer Gallery added to the stately red-brick grouping of central campus buildings. Expanded by Graham Hall around 1910, the original arts building lasted just shy of a century, and was razed in 1970 to make way for a modern arts complex.  The new Fine Arts Center, which opened in 1972, combined all the visual arts under one roof, including the ever-expanding Museum of Art.  The enormity of the building, with its striking glass and red tile faÃ§ade, and its elegant atrium adorned by Rodin's imposing bronze, â€œThe Walking Manâ€ reflected the prestige of the fine arts at Smith, and housed what was, and still is, one of the largest academic departments on campus.  In less than 25 years of use, however, it became clear that the combined pressures of New England weather and the changing nature of arts study had made a complete renovation of the complex necessary.  Planning for the renovations began in 1997, and the new, improved Brown Fine Arts Center that we know today was re-opened in 2002.