In this photograph art history students press into the image study room to study for the final exam, jostling around to share views of major works of world art.  This display was known, with a mix of fondness and dread, as “The Wall”.

Some aspects of art study have changed radically over the last century, and some not so much.   Prior to the digital age, preparing for an art history exam required sitting or standing in a crowded room, memorizing hundreds of printed reproductions of the world’s great works of art.  Today, students can view those works and millions more on their own computers through digital databases.  By contrast, a century of time has not changed the general appearance of the art history lecture hall: at the beginning of the both the 20th and 21st centuries, seating and a wall on which to display images are the only requirements. 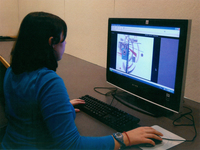 Digital databases enable students to study art individually, and in any location on campus that they choose.

The original Graham Hall, built in 1910, contained faculty offices and classrooms, including this impressive lecture hall. Graham Hall was one of the buildings demolished in 1970. However, we can still get an idea of the grandness of these ceiling rafters in the Mary Maples Dunn conference room in Pierce Hall today. The seating is similar to what is still in John M. Greene Hall. 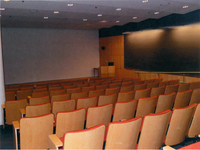 For all its modernity, the Graham Hall lecture room of today (in its 2002 incarnation) has the same general amenities as the original: chalkboard, image wall, speaker’s podium, and projection equipment.