Winthrop Hillyer and His Siblings 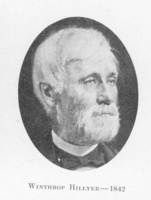 Winthrop Hillyer (1803-1883), after whom the art library is named, was a prominent businessman and a leading citizen of Northampton. Hillyer was listed among the many local businessmen in Northampton’s history who were important to the development and prosperity of the city. According to contemporary documents Hillyer was, at various times during his career in the city, a druggist on shop row, the head of the Northampton Institution of Savings, and one of the founders of the Northampton and Springfield Railroad Corporation. It was said that Hillyer was inspired by the enthusiasm of Smith’s students for the art collection—which at that time was located in College Hall—to donate a substantial sum in 1881 for the building of a proper art gallery.  The resulting Hillyer Art Gallery, opened in 1882, became an all-purpose building to create, display, and study art.

The tradition of Hillyer generosity to the fine arts at Smith College continued when Winthrop’s heirs, brother Drayton Hillyer (1816-1908), a Hartford, Connecticut insurance tycoon, and sister Sarah Hillyer Mather (1811-1896), also from Hartford, cleared an unsigned bequest to the art gallery from Winthrop upon his death in 1883. These funds made it possible to build an addition to the Hillyer Gallery in 1887.

When Drayton Hillyer’s wife, Charlotte, died in 1924, she left $65,000 to the college for the expansion and remodeling of the Hillyer Art Gallery.  Included in the improvements to the art building was a library space formally named the “Drayton Hillyer Library” in honor of her husband.  The combined funds from the family formed a solid endowment for the visual arts at Smith.

This is how Hillyer Gallery looked from the inner campus.  On the right is the original building; on the left is the first addition, built with the second Winthrop Hillyer bequest.