Werner Josten was professor of composition at Smith from 1923-1949.  Josten distinguished himself in many ways, but particularly through his revitalization of Baroque opera at Smith between 1926 and 1941.  At the time, college-sponsored opera was an innovative idea.  Josten began his run of productions with the American debut of Monteverdi’s The Coronation of Poppaea in 1926 to commemorate the opening of Sage Hall.  The cast of Poppaea featured Josten’s wife, Margaret, in the title role.

The Sage Hall performance space was not ideal for elaborate productions, so the subsequent operas were performed at Northampton’s Academy of Music.  For these productions, Josten brought together performers and musicians from among the Smith faculty and student body, the Northampton performing arts community, and nationally known professionals.  Josten’s Baroque operas began as an experiment, but soon became popular and highly-anticipated local events.  Spectators came from as far as Boston, Albany, and New York City to enjoy them. 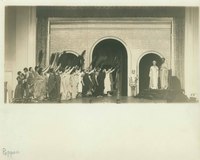 At the dedication of the new Sage Hall, Werner Josten brought Baroque opera to Smith, beginning a tradition of such productions in Northampton.  Margaret Josten, Werner Josten’s wife, can be seen here in the title role of "The Coronation of Poppaea".

Original program from the performance of Poppaea. 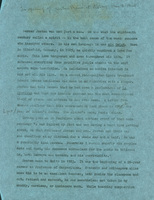 At the opening of the Josten Memorial Library on May 3, 1968, Philip Keppler, professor of music from 1952 to 1969, lauded Josten for bringing the college and community together through his Baroque Opera productions. Fittingly, the library named for him is also a resource valued by college and community alike.