The Hampshire Bookshop as Publisher 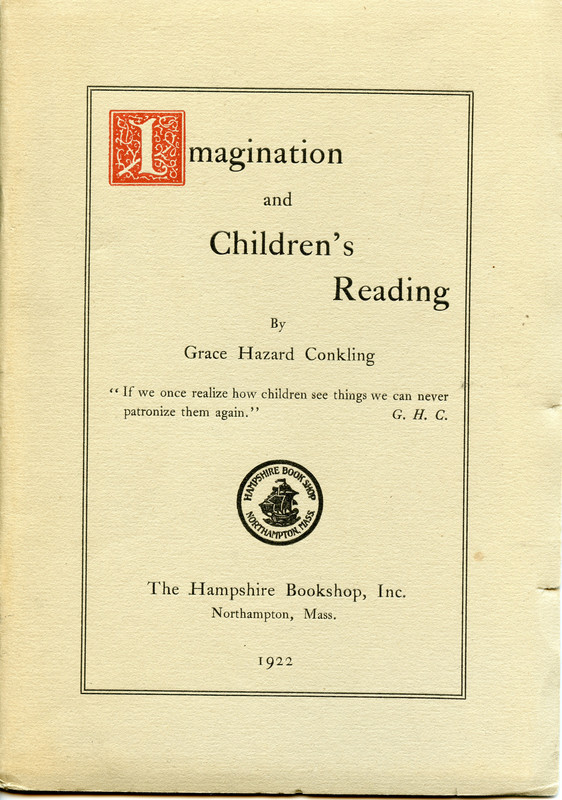 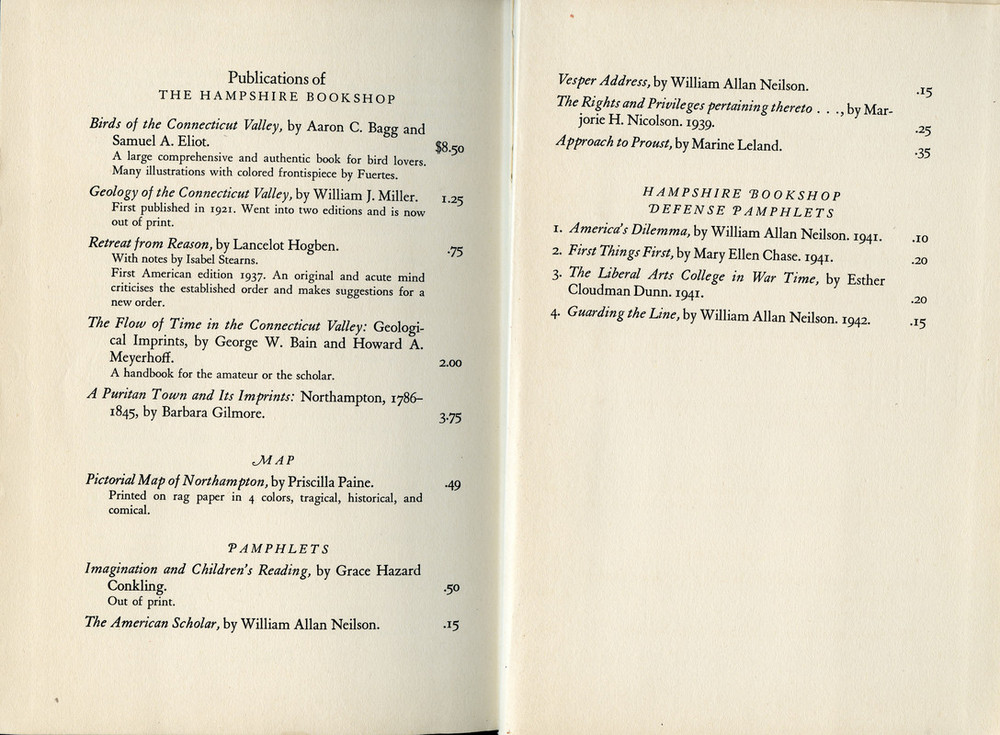 The Hampshire Bookshop engaged in a robust publishing program, issuing approximate forty pamphlets and books between 1921 and 1956 (this does not include dozens of their own book catalogues and newsletters). They issued scientific and literary works by Smith College presidents and faculty and other authors, including this essay by professor of English Grace Hazard Conkling.

A list of titles included in 1942 in The Flow of Time in the Connecticut Valley documents the variety of items published by the Bookshop. 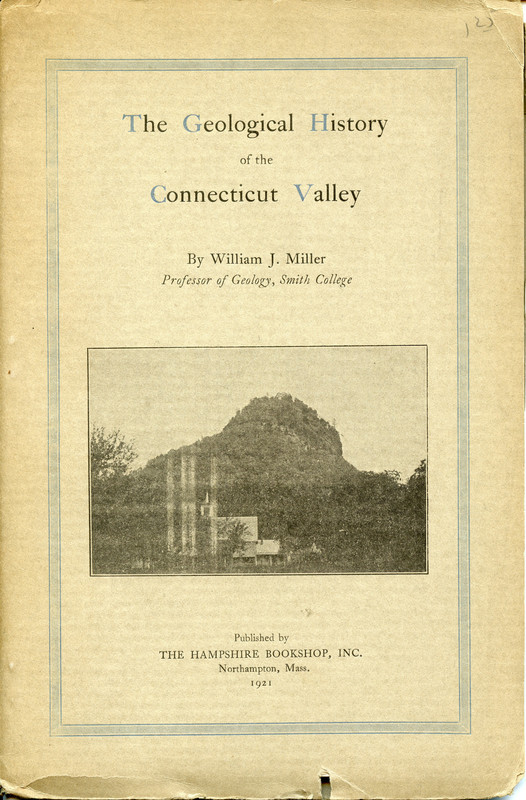 William J. Miller. Geological History of the Connecticut River Valley of Massachusetts: A Popular Account of its Rocks and Origin. 1921 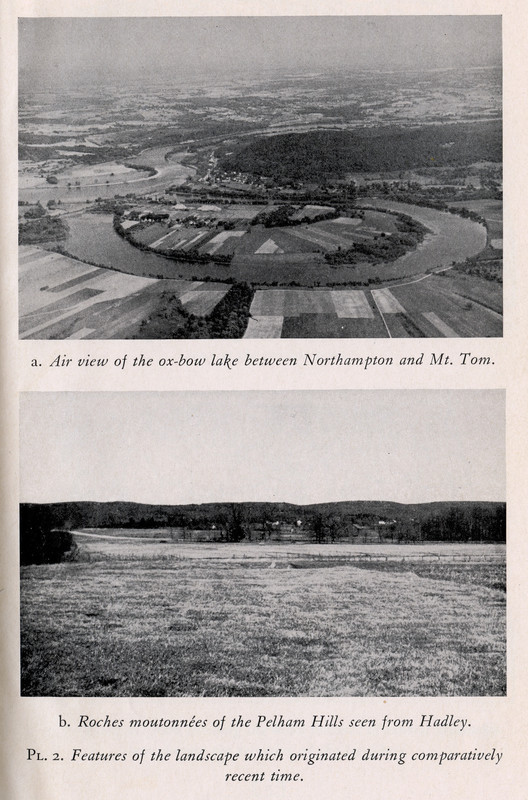 George Bain. The Flow of Time in the Connecticut Valley of Massachusetts. 1942

The Bookshop published two volumes on local geology. The first was issued in 1921, only five years after the founding of the Bookshop. The author, William J. Miller, was professor of Geology at Smith College. Miller's book was published in two editions, but was out-of-print by 1942. 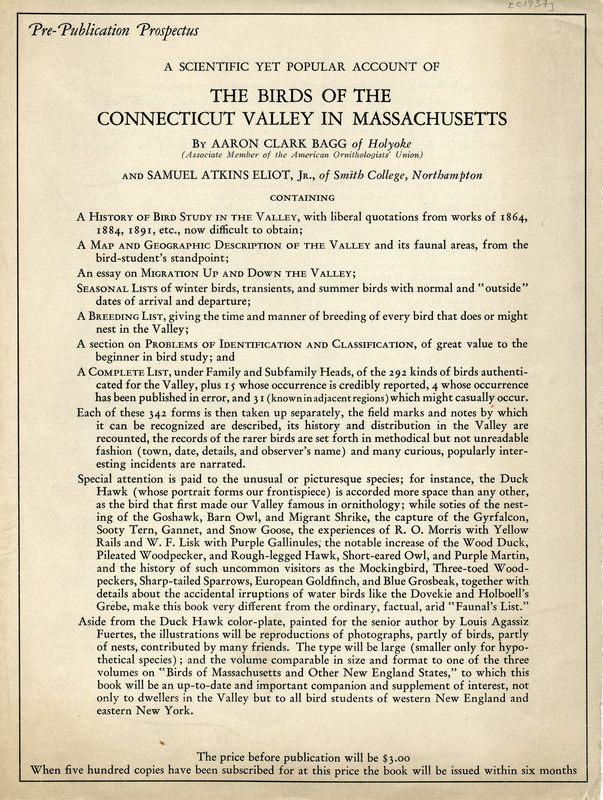 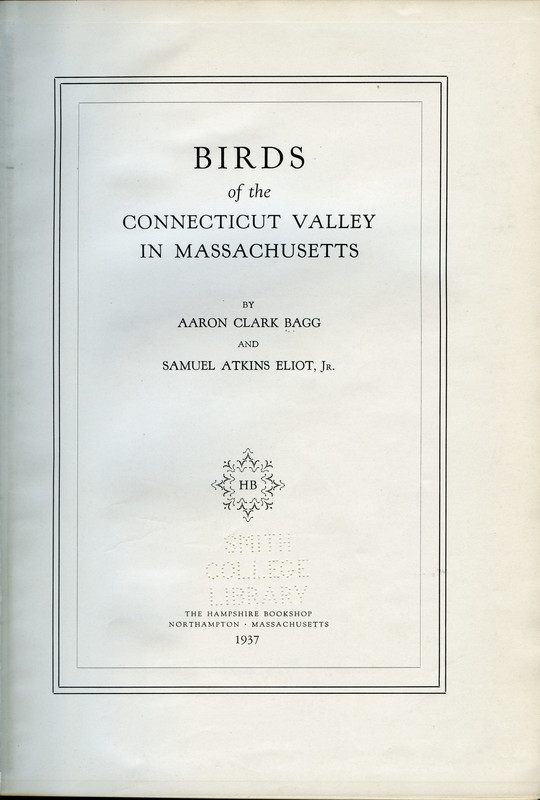 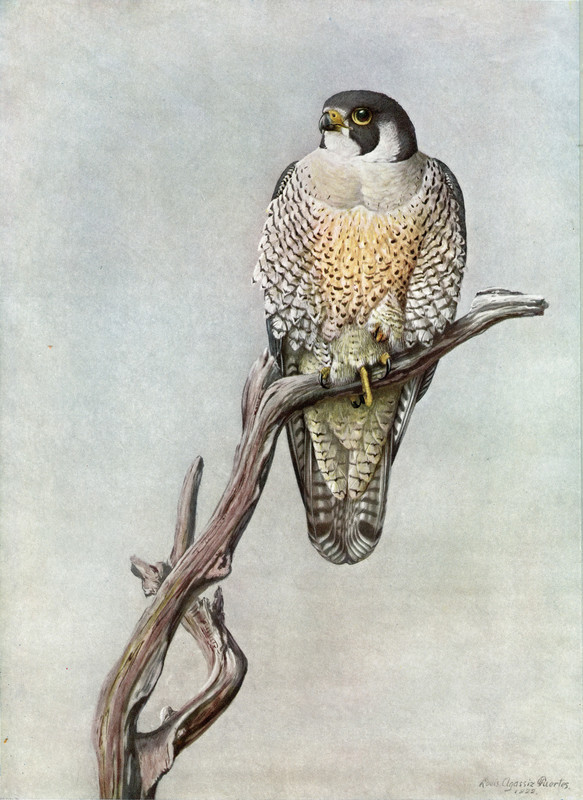 The Hampshire Bookshop's most ambitious publication was Birds of the Connecticut Valley. They issued a prospectus, or announcement, beforehand to raise funds for publication. One of the authors, Aaron C. Bagg, was born in Holyoke, MA, and in 1931 became president of the Parsons Paper Company there.

During World War II, the Bookshop was civic-minded and, among other things, participated in selling war bonds. The Bookshop also published a series of four Defense Pamphlets. The two included here are by Smith College President William Allan Neilson and professor of English, Esther Cloudman Dunn, who was Marion Dodd's longtime partner. 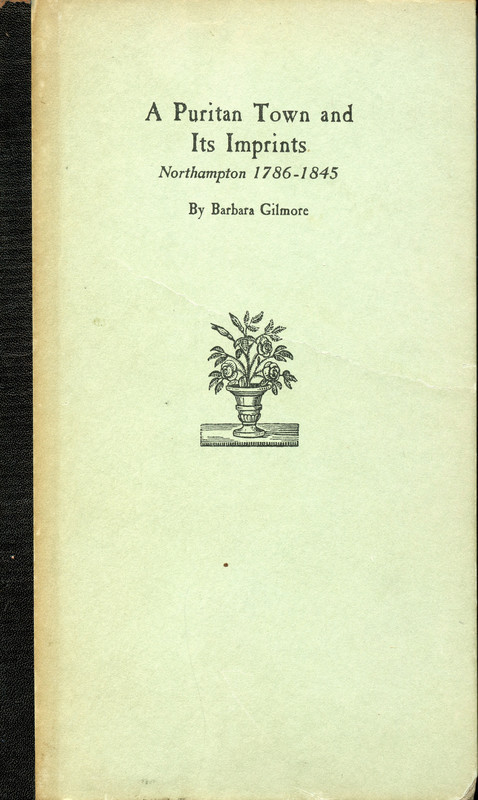 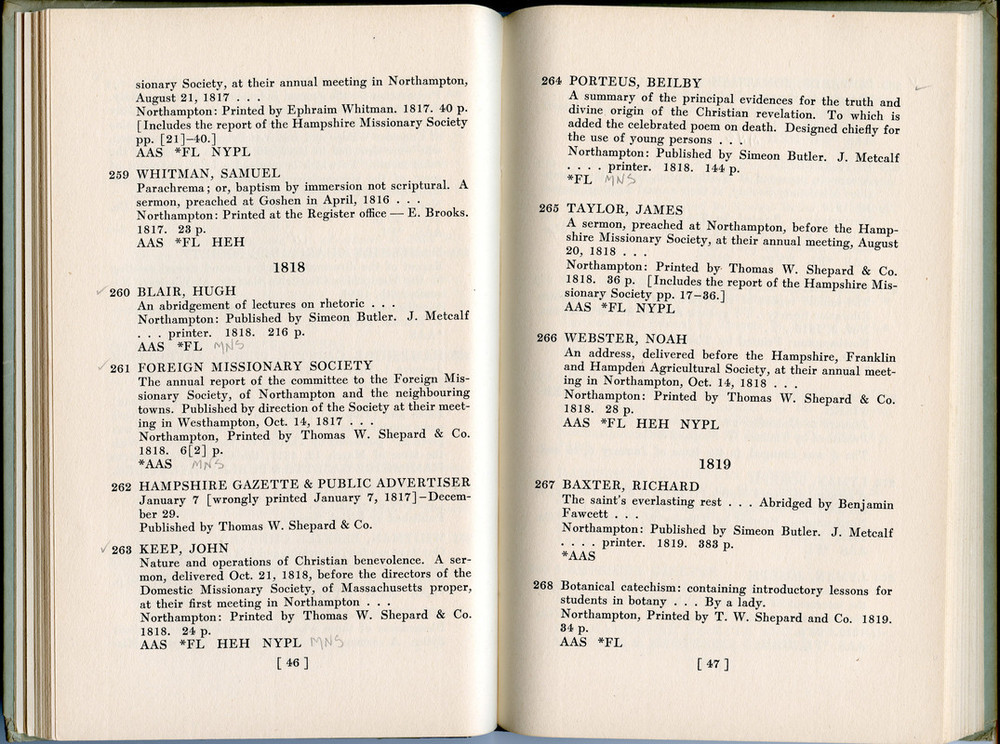 Also in 1942, the Bookshop published a definite bibliography of Northampton imprints: books published in Northampton between and 1786 and 1845. This was an active period for Northampton printers and publishers, who issued sermons and other religious texts, as well as a great number of small, illustrated children's books.

The Mortimer Rare Book Room's copy of Gilmore's bibliography is annotated with checkmarks and the initials "MNS" (code for Smith's library: Massachusetts/Northampton/Smith) to indicate which listed books are owned by Smith. 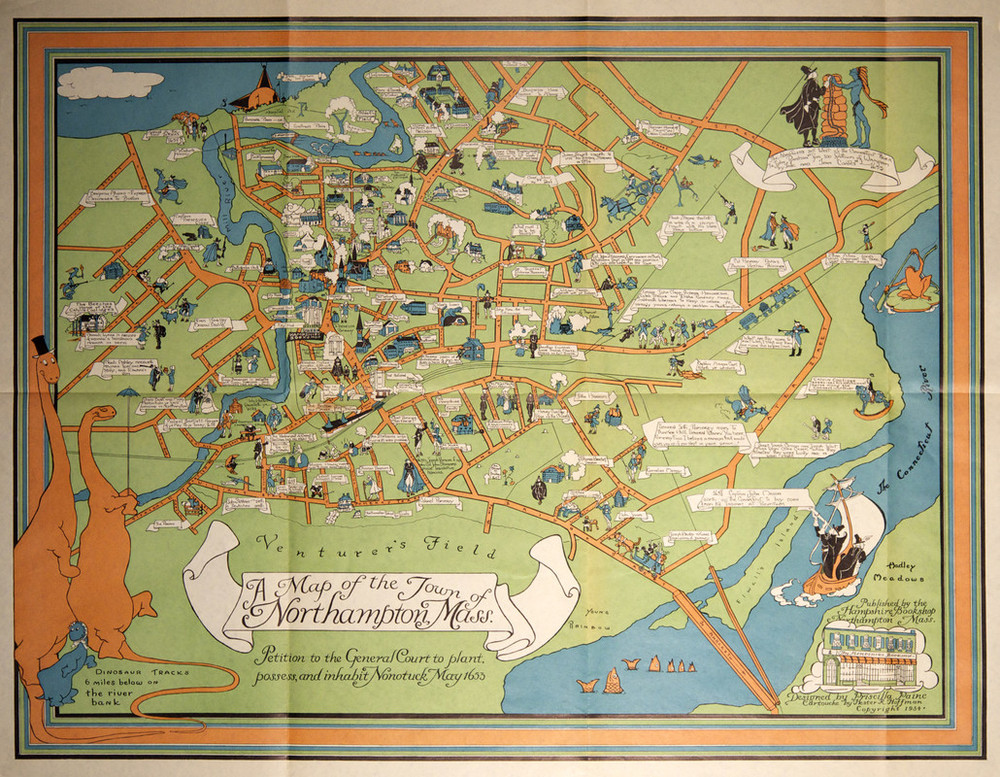 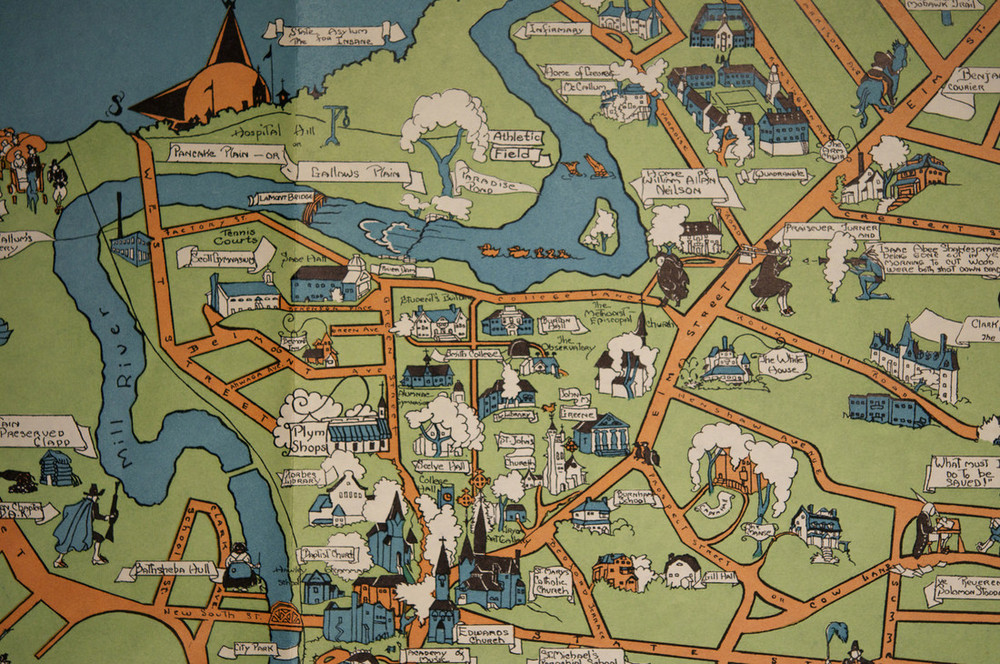 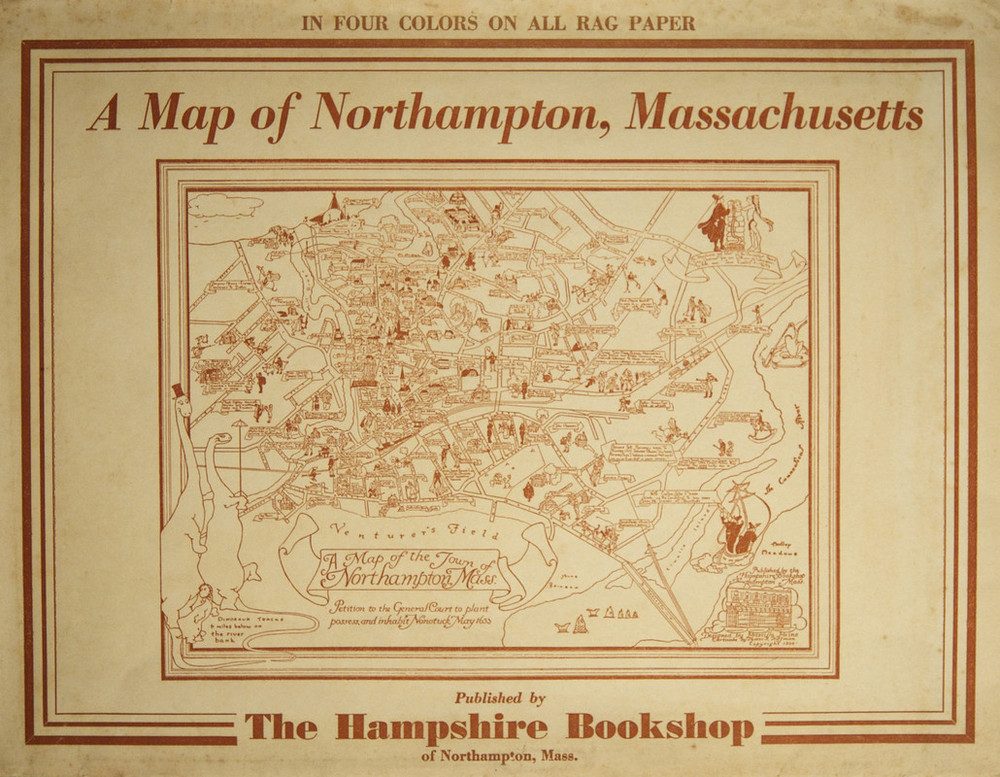 Priscilla Paine (later Mrs. Van der Poel), professor of art at Smith College from 1934-1972, created this charming map of Northampton, published by The Hampshire Bookshop in 1934. It depicts many incidents and people from the town’s colonial past, as well as featuring Smith College buildings and modern local businesses and landmarks, including of course, The Hampshire Bookshop (below Northampton City Hall). The cartouche of the Bookshop (in the lower right corner) was drawn, as was customary, by Hester R. Hoffman. This large map, printed on rag paper in four colors, was described by The Bookshop as "tragical, historical , and comical."

Note: The course of the Mill River (in the left-hand third of the map) runs through downtown, just behind Main Street. Back-to-back floods in 1936 and 1938 (the latter following on the Great Hurricane) inundated downtown Northampton and led the Army Corps of Engineers to divert the river away from the city center. An enormous dike on West Street, adjacent to the Smith College campus, and a nearly mile-long dike on the opposite side of downtown also keep the river at bay.