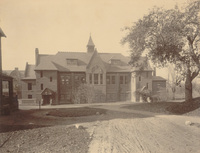 The Cambridge Seven expansion plan, presented in April 1975, included the demolition of Alumnae Gymnasium to make room for a new building in its place. This plan was approved by all but one member of the Library Building Committee and by the College’s Board of Trustees. 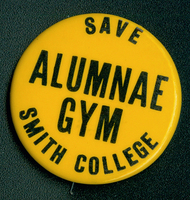 A strong, organized opposition to tearing down Alumnae Gymnasium quickly developed. These efforts were  led by the Smith Alumnae Committee to Save Alumnae Gymnasium (SACSAG). Consisting of nine alumnae with backgrounds in historic preservation, the SACSAG steering committee headed an effort that added the building to the National Register of Historic Places in April 1976; prevented its destruction; and, eventually, led to its adaption for use as library space for the Nonprint Resources Center, the Sophia Smith Collection, and the College Archives.