When Smith College opened in September 1875, it possessed no library. In the first years of the College students were allowed free use of the public Clarke Library on Main Street in Northampton. The only “library” on campus was a small room in College Hall. This library contained a Bible, a dictionary, an atlas, and a few periodicals and newspapers. The sum of $4,000 was appropriated in 1877 for the first reference library. 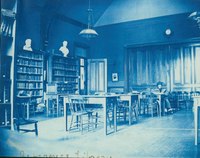 In 1882 when Hillyer Gallery was built, the space originally occupied by the College’s art collection was transformed into the first College Library. The books remained here until Seelye Hall was opened in 1900. 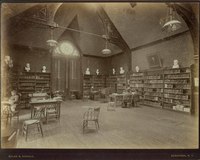 ← The History of Neilson Library
Forbes Library →
In the Beginning