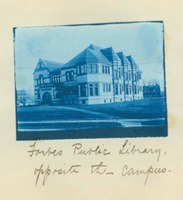 President Seelye wrote in his January 1900 report: “It is hoped that the Forbes Library, with its more spacious rooms and larger funds will continue to supplement the college deficiency, but a library intended for the general public cannot be depended upon to supply the wants of students engaged in special courses of study, and experience has clearly shown that the College needs an ample library of its own, in addition to the privileges afforded by the libraries of the city.”