L. Clark Seelye, Smith’s first president, noted in his 1890 annual report: “I should also like to have some provision made for a Librarian. Hitherto our books have been freely used only under the supervision of some member of the senior class. … In my judgment, the time has come to appoint someone who may not only care for the library but may direct students in courses of reading and perhaps give assistance as Registrar.”

Mary Etta Gorham, class of 1879, was appointed the College’s first Librarian and Registrar in 1890. She served for five years. Until this time the library had been under the supervision of some member of the senior class, and the books had been catalogued by experts at the expense of the alumnae. 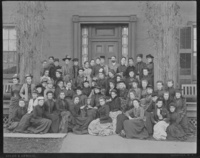 Louise Whiting Lyon, class of 1892, and shown here with her classmates in their junior year, was the College Librarian from 1896 to 1911. Until 1903, the Librarian managed the college library with only the help of student assistants. Fanny Borden was appointed Assistant Librarian in 1903. She was the first professionally trained librarian in the Smith College Library. By the time the library was moved into the new library building, the staff had increased to six members.

Eunice Wead, class of 1902, at the left, is shown here with her sister Katherine Wead, class of 1909, during the time when she was Smith College’s reference librarian, 1906–09. Eunice Wead was later Curator of Rare Books at the University of Michigan, Assistant Curator of the Clemens Library, and Professor of Library Science. On her retirement from Michigan, she returned to Smith to give a course in book history and book arts in 1945–46. Wead was the first Chairman of the council of the Friends of the Library.