Josephine Clark, class of 1880, College Librarian, 1907–19, under whose guidance the present library was built.

President Seelye wrote this letter to Clark inquiring whether she would be interested in the position of chief librarian at Smith.

Clark’s response to President Seelye’s inquiry was positive and several months later, Seelye wrote this letter to confirm her selection as chief librarian of the College. She held the position for 12 years until her retirement to California.

In this little cloth book edged with red leather, Clark wrote a variety of notes: her thoughts about the architects’ plans for the library along with suggestions for changes, lists of gifts of money and furniture for various rooms in the building, and draft rules and regulations for the new library’s use. (Please click on the image to see additional pages of this notebook.)

Another page from Clark's notebook.

Josephine Clark kept in touch with her fellow class of 1880 alums by sending out annual letters. Here she writes in November 1909 about the upcoming move into the new library:

This is the third year of my work here and the only regret connected with it is that I am not beginning it in the new library building. But the word and work of men failed us and instead of taking possession of the new quarters the first of August it will be nearer the first of December. We all, faculty and students, are more than anxious to enter upon the joys of a real library building with spacious rooms and an atmosphere of books and quiet. We shall eat our Thanksgiving dinner with especial relish if we can have the chance to move books all the rest of the day.

Nearly a year after the move into the new library building, Josephine Clark sent this happy update to her class of 1880 friends:

It has seemed like play this fall to go into a library in running order and with no moving of anything, aheel. Plenty of room, and more and more using the library. I feel that the building has been re-dedicated by the visits of so many distinguished men and women on the day of the inauguration [of Smith’s President Marion Burton], among them Mrs. Howe and Jane Addams. That was a great day, worthy the college. No written account can convey the spirit of the whole day. The old alumnae felt proud to be of it and in it. I wish you all could have been here. 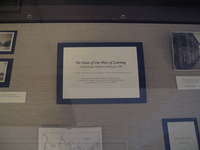