Planning for the New Library

A Faculty Library Committee was formed in the fall of 1905 and included the College’s librarians. President Seelye asked this committee to present a general plan for a new library that would be shared with the architects. These plans, including the sketch shown here, were submitted to Seelye in October 1906. Interestingly, the plans bear almost no resemblance to the building that was constructed.

The amount required by Mr. Carnegie to meet the conditions of his offer of $75,000 for a new college library has been secured, and the plans made by Lord & Hewlett of New York have already been adopted by the Building Committee, and contracts made for their execution with the proviso that the building shall be finished August 1909, so that it will be ready for use at the beginning of the next collegiate year. These plans—which have been carefully examined by the librarians at Smith and elsewhere—provide for a large and commodious library that will add much to the educational resources of the College. A site has been chosen for the building just behind the Hatfield House, with the intention of moving the Hatfield House and the adjoining Old Gymnasium to some other location. 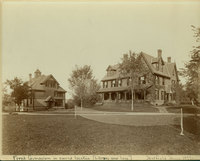 Shown in this photograph are the first Gymnasium and Hatfield House on the current site of the library. Before the new library was completed in 1909, Hatfield House had to be moved to its present position on campus and the Gymnasium was moved across College Lane to serve as a shop for the Department of Buildings and Grounds. Later the Gymnasium was torn down when the College acquired the former McCallum Hosiery factory buildings for use as offices and shops.

Laura Wilber, class of 1911 and a resident of Washburn House, wrote this letter to her family in the spring of 1909. In it she notes the progress of the new library construction and the moving of “Old Gym”:

You may be delighted to know that the Old Gym is on its way across the back campus to its final lodging across the street behind the Students Building. They started the real moving yesterday and it went gallantly over and is now quite far from its original position. It was such a relief to look out my window and not see it at all. And the Library is practically finished outside now, and they are leveling and filling in the little hollow between the Students Building and the new gym. O I tell you we are picking up some. 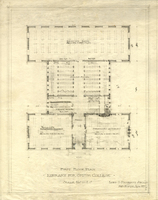 The architectural firm of Lord & Hewlett comprised Austin Lord (1860–1922) and J. Monroe Hewlett (1868–1941). Lord had worked for McKim, Mead & White, assisted Charles McKim on the Brooklyn Museum and Columbia University designs, and would become director of the School of Architecture at Columbia University. Hewlett was a Brooklynite who studied at Polytechnic Institute and Columbia before attending the École des Beaux-Arts. A muralist as well as an architect, he created the detailed cartoons that served his then partner Charles Basin in the execution of the Sky Ceiling fresco at Grand Central Terminal. Hewlett was also the father-in-law of the inventor and architect R. Buckminster Fuller.

Writing in the Smith College Monthly, Alice Babcock, class of 1911, described architectural changes on the campus in the spring of 1909 and the growing excitement for the new library:

Coming up Main Street and up the College hill, the new library will loom up before us with inspiring dignity. Few of us now appreciate all that this building will add to the beauty and resources of our long-expectant Alma Mater. Crowded into our present reference room and driven to haggle over books after a hasty luncheon, we’ll not know how to behave in this luxurious “browsing room” which is to be open at all times to us all… If this room is the broad way to a liberal education with all its attendant pleasures, the main hall cannot be called the narrow way, although it leads to the true workshop–the large reading room 121 x 38 which lies across the rear of the building…. Ventilation, light, air and space are all secured, and when our library is finally completed we’ll rejoice in a most gratifying substance of things long-hoped for.