The original library building was designed with future expansion in mind; the H-shaped structure could have additions built on at the east and west sides. President William Allen Neilson announced in his 1936 President’s Report that it was time for a new wing:

"The largest gift received by the college during the year was the very generous grant of $175,000 from the Carnegie Corporation of New York for the development of the Library. The growth of this most vital part of our equipment has possibly not been remarked by the alumnae. When the present building was erected in 1910 with the aid of a gift from Mr. Carnegie, the whole of our collection, with the exception of a few books in the laboratory buildings, had been housed in the alcoves in Seelye Hall. At the end of President Burton’s administration it amounted to some 65,000 volumes. Today we have about 240,000 volumes, the largest total of any of the women’s colleges. The building is now crowded, and has been found inadequate in other respects. There is no appropriate space for the cataloguers and other members of the staff; we need more studies and more seminar rooms. The new grant from the Carnegie Corporation is for accessions and maintenance, not for buildings. The situation has become all but intolerable, so it has been decided, in spite of no immediate prospect of funds for the purpose, to proceed with the building of an addition. Ground was broken just after Commencement for a wing on the north side, and it is hoped that it can be occupied in the summer of 1937. An account of the new accommodations should be possible in my next report."

Mary Dunham, College Librarian for 22 years, from 1920–42, supervised the addition of the first Library wing under construction in 1936 and opened in 1937.

In a talk she gave to the Alumnae Council in 1939, Dunham described the work of developing a college library. She also noted that “the Smith College library would be a most appropriate place for the development of a collection of books on prominent English and American women and their activities.” This would be particularly appropriate at Smith College, Miss Dunham said, because of the founding of Smith at the time when the women’s movement was beginning to take root.

Three years later a book collection of “Works of Women Writers” was founded and soon evolved into a historical research collection of material documenting the lives and activities of women. In 1946 it was named in honor of the founder of Smith College. Today the Sophia Smith Collection consists of approximately 647 collections (over 10,000 linear feet) of material in manuscript, print, and audiovisual formats. The holdings document the historical experience of women in the United States and abroad from the colonial era to the present. 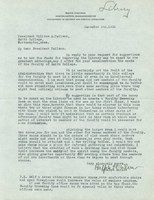 In 1935 President Neilson requested suggestions from faculty and staff for improving the Library and its facilities. He received many replies, including this letter from Ralph Harlow of the Department of Religion and Biblical Literature.

Professor Harlow wanted a “Faculty Browsing Room,” because he wrote, “there is little opportunity in this college for the faculty to meet in a social or even in an intellectual companionship.” He added that club rooms in the library, “one for men and the other for women members of the faculty,” would be another excellent gathering place, “where members might smoke and chat at their leisure, or even play cards.”

The new library addition did include a faculty lounge, but it was not divided into separate spaces for men and women. 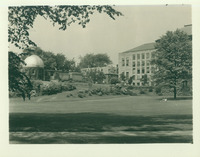 The 1937 library addition was designed by Karl Putnam, professor of architecture. Putnam taught at Smith for 23 years. As a practicing architect he was responsible for the design of many campus buildings, including the Elizabeth Mason Infirmary, the Crew House, the Field House, Scott Gymnasium, and Sage Hall.

"President Neilson’s library wing doubled the capacity for book storage, made the structure asymmetrical in plan and imposed the condition of extending a clearly-defined two-story as a four-story building and a three-story as a six, with continuation of the existing architectural pattern quite impossible. So the new structure rejected the compromise which could have been only futile, continued its exterior in brownstone and left complete and intact the composition of the older building.

The new wing provided space on the first floor mezzanine for a Rare Book Room, labeled “Treasures” on this blueprint. The College Archives was given a space at the basement Mezzanine floor, between two seminar rooms. 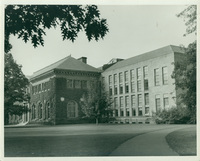 President Neilson’s 1937 report on the state of the College was bursting with pride about the new library addition:

The addition to the Library has been completed and is now occupied. The stacks have accommodation for about 250,00 volumes which will more than double the present contents of the building. At the present rate of increase, it ought to serve for about twenty-five years. In addition to the stacks, the new wing contains thirty-two rooms used by members of the Faculty as studies and offices, six rooms for members of the Library staff, eight seminars, a special room with small kitchen for the use of members of the Faculty, a room where new accessions can be examined, a room for the storing and reading of film reproductions of rare books, and abundant storage space.

In addition, on the north end of the building, there is a small chapel seated for about 75 persons, which will be used for such religious meetings as have hitherto been uncomfortably housed in Students’ Building. Its main purpose, however, is to afford a place for quiet meditation, such as has been impossible to find on our campus. The College is indebted to Mrs. Eva K. Linthicum for a gift of $5000 to furnish the pulpit, pews, and choir stalls, and to Mrs. Henry J. Blakeslee of the Class of 1899 for an electrical organ, to Mrs. John R. Ewers of Pittsburgh for the alter table and the furnishings given in memory of her daughter, Jane Carey of the Class of 1937, to the Class of 1895 for the gift of a lectern, and to Miss Mary P. Allison of the Class of 1902 for the pulpit Bible.

This Smith College press release described the library construction project as it was near completion.

The Library’s first wing was completed and opened to faculty and students in September of 1937. In addition to new book stacks, space was provided for faculty offices, seminar rooms, rooms for special collections, offices and work room for the Library staff, and carrels for student use. There was also a small chapel with a seating capacity of about seventy.