In addition to their gifts for the Building Fund and for furnishings, the alumnae presented many gifts of books and contributions to book purchasing funds, at the time of the opening of the library.


The Browsing Room, which opened in January 1910, was paneled and furnished in memory of Edith C. Gallagher, class of 1907, by her parents. In the bookcases lining the walls was an unusual collection of standard authors in limited editions and fine bindings (the gift of Lucie Towers Chandler, 1905). A notice in the Smith College Weekly expressed the appreciation of the students: “The Browsing Room is one of those places with an atmosphere of its own. Before its glass doors we leave our cares and worries and it receives us quietly and graciously, until after an hour of its silent company, we find that our troubles have vanished.” 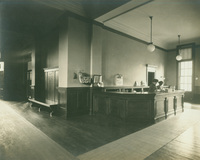 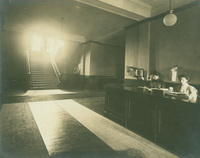 The Loan Desk in its first position. The windows on the landing of the main staircase were removed when the first addition was added in 1936–37. 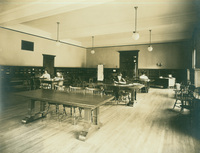 The Periodical Room was furnished by the Class of 1905. This room is now the circulation workroom. Fundraising efforts are currently underway to create an elegant new reading room in this space. 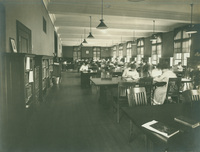 Florence Homer Snow, class of 1904, and first general secretary of the Alumnae Association, wrote this article for the Smith Alumnae Quarterly enthusiastically describing the new library for her fellow alums who had yet to see it.