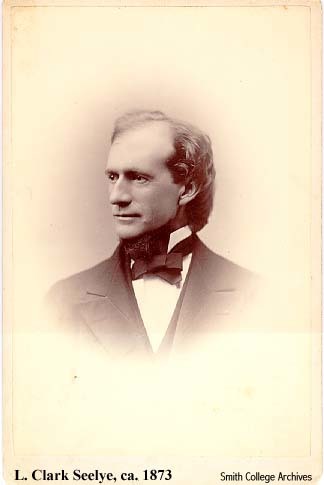 Laurenus Clark Seelye (1837-1924) was the first President of Smith College from 1873 to 1910. Born in Bethel, Connecticut, Seelye was a descendant of seven generations of Puritan families of thrifty farmers and merchants. He was graduated from Union College in 1857, at just under twenty years of age. His theological training was begun at the Theological Seminary at Andover and completed, after extensive travel in Europe and the Middle East, in Berlin and Heidelberg. He received his first and only pastoral charge at the North Congregational Church in Springfield, Massachusetts in 1863, and served there for just over two years. Also in that year, he married Henrietta Chapin.

In 1865, Seelye gave up his church to accept the Williston professorship of rhetoric, oratory, and English literature at Amherst College, where his brother Julius was then professor of philosophy.

In 1873, after a successful eight-year tenure at Amherst College, Seelye received an invitation to become the first president of the newly established Smith College. Initially, he refused, believing that the endowment of the new college was too small. Eventually, however, he accepted, and in doing so, he found his life's work: henceforth he devoted his entire energies to the interests of the College.

Seelye began by insisting on entrance requirements of equal difficulty with those of the New England colleges for men and an equal level of achievement for the degree. There was to be no preparatory school attached, where unprepared candidates might find a haven, for fear of the possible ill effects it might have on academic standards. The students were to live in small homelike groups, not in one large dormitory such as had been built at Vassar College or Mount Holyoke Seminary. Special attention was to be paid to art and music. Despite the small funds at his disposal to carry out his goals and hardly unanimous popular support even regarding the desirability of seeing them achieved, Seelye and Smith College went forward: the first class of fourteen women entered in 1875, and twenty-five years later the number of students was 1,133, assets in that period having multiplied five times. In 1910, when Seelye retired, the students numbered 1,635, making Smith the largest institution of its kind.

Though in appearance and manner Seelye displayed some of the austerity of his Puritan forebears, he earned the affection and devotion of students and faculty throughout his presidency. The college's growth in endowment and facilities was due more to the care and skill of his management than to the generosity of outsiders. After his retirement, Seelye remained active in Northampton, serving for three years on a commission on the Massachusetts Agricultural College at Amherst (now the University of Massachusetts-Amherst). In 1923, he published The Early History of Smith College, and in 1925, his Prayers of a College Year was published posthumously.