Sophia Smith's pastor, John Morton Greene, is regarded by many as the father of the idea of founding Smith College. Archival records indicate that he guided Sophia Smith to face up to the responsibilities inherent in her wealth, beginning on the spring day in 1861 when she came to him in distress asking for his advice to her dying days in 1870 when she entrusted her personal journal to him. As her closest advisor, it seems clear that John M. Greene exerted considerable influence on her parishioner to apply the greatest portion of her estate to the establishment of a women's college.

Born in Hadley, Massachusetts on March 12, 1830, John M. Greene was an 1853 graduate of Amherst College, which also granted him the A.M. in 1856 and D.D. in 1881. In 1857, he married Louisa Dickinson of North Amherst, an 1857 graduate of Mount Holyoke Seminary. In the same year, Rev. Greene was installed as the pastor at the Congregational church at Hatfield, where he remained for eleven years. In Hatfield, Rev. Greene met Sophia Smith. In 1868, he was called to the pastorate at the Congregational Church at South Hadley, Massachusetts. Two years later he went to the Eliot Congregational Church in Lowell, Massachusetts, where he remained for thirty years. After retiring from regular pastoral duties in 1910, Greene assisted in the establishment of a mission in Maine. He died April 28, 1919.

John M. Greene was a trustee of Smith College almost continuously from its founding in 1871 until his death. In addition, he served on the board of trustees of Mount Holyoke Seminary (now Mount Holyoke College), 1866-1875; and was president of the board of trustees at the French Protestant College in Springfield, 1885-1889. As an advisor to Sophia Smith, he was also instrumental in the founding of Smith Academy in Hatfield, and acted in a similar capacity for Miss Rogers to found the Rogers Hall School in Lowell, where he acted as president of its board of trustees, 1892-1909. For over forty years he was one of the overseers of the charity fund at Amherst College. 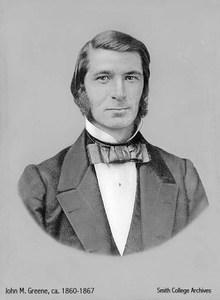 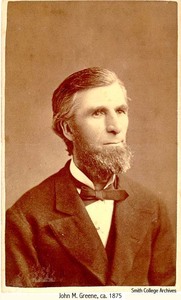