Who Was Sophia Smith? 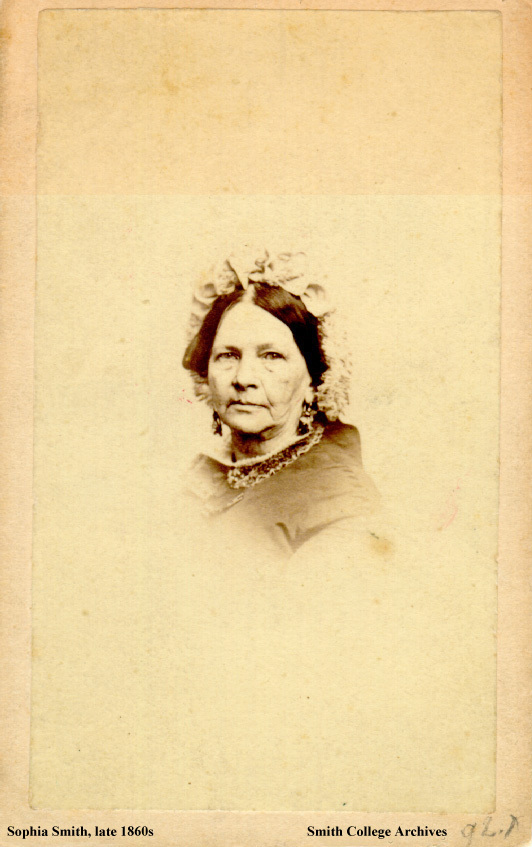 By the age of 40, Sophia Smith had become quite deaf, and even the use of an ear trumpet did not counter the growing isolation that her hearing loss engendered in the years to follow. The death of her siblings Harriet (in 1859) and Austin (in 1861) left Sophia Smith wealthy but alone. In the final decade of her life, she was faced with the difficult decision of how to dispose of the considerable Smith family fortune. What led her, during that period, to her determination to devote the largest part of that fortune -- $387,468 -- to establish a women's college in Northampton?

Because few family records survive, little is known about Sophia's early years. Her journal, which she kept for the last nine years of her life, is primarily a record of her spiritual development but also includes discussions of events of the day, her travels, and the books she was reading.

While many girls of her era were given a meager formal education, Sophia appears to have had more educational advantages than most and demonstrated a keen thirst for knowledge. Her pastor, John M. Greene, recalls Sophia telling her that as a girl she used to sit on the steps of the schoolhouse in the morning and hear the boys recite their lessons, "with the hope of picking up there some crumbs of knowledge," as girls in Hatfield at that time received their lessons only in the afternoon. She read avidly and widely throughout her life. Such passion -- which included poetry and prose, newspapers and magazines of social, political and literary commentary -- not only portended her future contributions but may also have helped her endure the tragedies of her adulthood.

Besides the schools in Hatfield, Sophia Smith attended a school in Hartford, Conn., for twelve weeks when she was fourteen years old. After this, she was a pupil for a time in what was later known as the Hopkins Academy in Hadley.

Quotations by and about Sophia Smith

"I knew Miss Smith intimately the last thirteen years of her life. [...] Her course of life was quiet, thoughtful, uneventful. There were no startling episodes, no wild romances in it. She built few castles in dreamland or in love-land. Life was serious, real, to her. She walked with her feet on terra firma, not in the clouds. She was a woman of high sentiment, but not sentimental. She never uttered diatribes against married life, but she always commended it; yet she was content to remain unmarried, fully persuaded that was the life God meant for her."

"Miss Smith often spoke of her childhood and her youth. She retained vivid and pleasant recollections of them. I think she regarded them as the happiest periods of her life."

"The past week has been a trying one on some accounts. My girl domestic has been very disorderly. She seems very wilful, throwing off all restraint, setting her own will in defiance of rule and authority. I have already put up with more from her than is consistent with a proper dignity as mistress of the house. I want wisdom from above to get along with her."

"Sophia became an expert spinner and housewives were anxious to obtain her fine thread in return for other commodities. -- Nor was Sophia an extravagant housekeeper. There is a story that she scolded her maid so severely when she found her about to use an egg in a loaf of ginger bread that the maid lost her temper and threw the egg at her mistress." 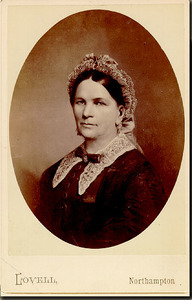 Entry by "Sophia" in an autograph book, signature 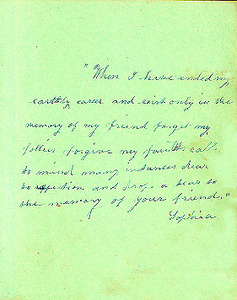 Entry by Sophia Smith in an autograph book 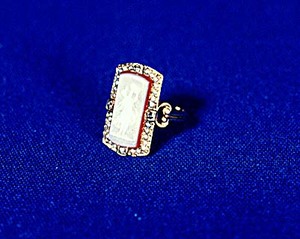 Ring believed to have belonged to Sophia Smith 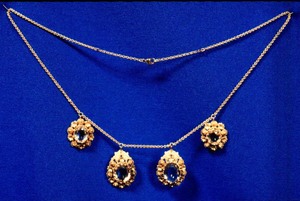 Necklace believed to have belonged to Sophia Smith