Sophia Smith's Last Will and Testament 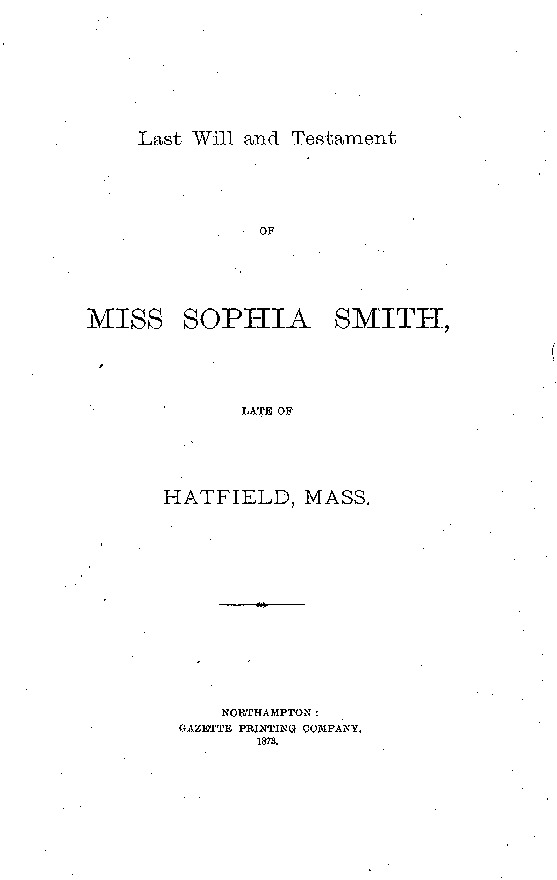 Last Will and Testament of Sophia Smith, p.1

Last Will and Testament of Miss Sophia Smith, Late of Hatfield, Mass.

In the Name of God. Amen.

I, SOPHIA SMITH of Hatfield, in the County of Hampshire, and Commonwealth of Massachusetts, do on this 8th day of March, in the year of our Lord one thousand eight hundred and seventy, make and publish this my last Will and Testament, disposing of my worldly estate in manner and form as follows, to wit:

FIRST: I give and bequeath to my cousins, Electa Graves and Charlotte W. Billings, One Thousand Dollars each, and my jewelry, wardrobe, and household furniture, except my large portrait of myself.

THIRD: I give and bequeath One Hundred Dollars each, to Louisa D. Greene, wife of Rev. John M. Greene, Philura T. Hubbard, wife of George W. Hubbard, Ann Larkin, wife of Michael Larkin, and Mary Harney, who formerly lived with me.

FOURTH: I give and bequeath to the American Board of Commissioners for Foreign Missions, the American Bible Society, formed in New York in 1816, the American Tract Society, instituted in the city of New York, and the American Home Missionary Society, Two Thousand Dollars each, to be applied to the charitable uses and purposes of said Societies.

SIXTH: I hereby appoint a Board of Trustees, to be composed of the following named eight persons, to wit: Joseph D. Billings, George W. Hubbard, Jonathan S. Graves, Alpheus Cowles, Silas G. Hubbard, Frederick D. Billings, William H. Dickinson, and Daniel W. Wells, all of said Hatfield, and their successors are always to be inhabitants of said Hatfield, who shall have the care and management of the said sum of Seventy Five Thousand, (75,000,) Dollars. And with the same, as hereinafter directed, to establish in the Town of Hatfield, as soon after my decease as the same can be conveniently and properly done, an Institution or School, to be called THE SMITH ACADEMY, and who shall have the entire oversight and control of said Academy, whenever the same shall go into operation, and upon the removal, decease, or resignation of any one or more of said Trustees, or there shall be a vacancy on said Board from any cause whatever, the remaining members of said Board are hereby authorized, and it is hereby made their duty immediately to elect suitable persons by ballot, to fill such vacancies, and said Trustees shall appropriate and expend the said sum of Seventy Five Thousand, (75,000,) Dollars, in the following manner, to wit: A sum not exceeding Twenty Thousand, (20,000,) Dollars, in the erection of a suitable building of bricks, and the purchasing of suitable grounds, and furnishing the same for said School; Thirty Thousand, (30,000,) Dollars to be a permanent fund, the income of which shall be used for the support of the teachers of the said School, and for the general purposes of the same; Fifteen Thousand, (15,000,) Dollars, for the erection and furnishing of a second building when needed; Ten Thousand, (10,000,) Dollars, and the interest of the last mentioned sum of Fifteen Thousand, (15,000,) Dollars, until it shall be used for said second building, for a fund for indigent students, the income of which shall be used to pay the tuition and board of an equal number of indigent young men and women, preparing for college to be teachers or for business; provided, always, that these young men and women are of good moral character, industrious in their habits, of good natural ability, and shall remain connected with the School as pupils, not less than one year.

SEVENTH: This School shall consist of an English and a Classical Department, both united under one Principal and one Preceptress, but other branches of learning may be taught in subordination to the above departments.

EIGHTH: Scholars from the Town of Hatfield shall enjoy all the privileges of this School, by paying one-half of the ordinary tuition.

NINTH: Equal advantages shall be afforded in this School to both sexes.

TENTH: The Teachers shall consist of a Principal and Preceptress, and such other teachers as in the judgment of the Trustees the wants of the School shall demand. And always the number of female teachers shall be equal or one less than that of the male teachers.

ELEVENTH: The religious influence of this School shall not be sectarian, but evangelically Christian.

TWELFTH: I hereby order and direct that the buildings hereinbefore directed to be built for said Academy, shall be located and always remain upon the Main street, so-called, in said Hatfield.

THIRTEENTH: I hereby make the following provisions for the establishment and maintenance of an Institution for the higher education of young women, with the design to furnish for my own sex means and facilities for education equal to those which are afforded now in our Colleges to young men.

It is my opinion that by the higher and more thorough Christian education of women, what are called their "wrongs" will be redressed, their wages adjusted, their weight of influence in reforming the evils of society will be greatly increased, as teachers, as writers, as mothers, as members of society, their power for good will be incalculably enlarged.

ART. I: This Institution shall be called THE SMITH COLLEGE.

ART. 3: Sensible of what the Christian Religion has done for my sex, and believing that all education should be for the glory of God, and the good of man, I direct that the Holy Scriptures be daily and systematically read and studied in said College, and without giving preference to any sect or denomination, all the education and all the discipline shall be pervaded by the Spirit of Evangelical Christian Religion. I direct, also, that higher culture in the English Language and Literature be given in said College; also, in Ancient and Modern Languages, in the Mathematical and Physical Sciences, in the Useful and the Fine Arts, in Intellectual, Moral and Aesthetic Philosophy, in Natural Theology, in the Evidences of Christianity, in Gymnastics and Physical Culture, in the Sciences and Arts, which pertain to Education, Society, and Government, and in such other studies as coming times may develop or demand for the education of women and the progress of the race. I would have the education suited to the mental and physical wants of woman. It is not my design to render my sex any the less feminine, but to develop as fully as may be the powers of womanhood, and furnish women with the means of usefulness, happiness and honor, now withheld from them.

ART. 5: The above mentioned Trustees, and their associates and successors, shall have full power to increase their number, to fill vacancies, invest and expend this money, and to found and set in operation the Institution, as soon as may be after my decease, and order all its concerns, in such manner as they may judge best calculated to accomplish the objects before stated. Only I direct that not more than one-half of the sum appropriated by me to this object, shall be invested in buildings and grounds, the other half or more shall be invested by the Trustees in a safe manner, to be a permanent fund, the interest of which alone shall be used forever for furnishing teachers, library, and apparatus, for the higher education of young women, and for the general purposes and objects of the Institution.

It is my wish that the Institution be so conducted, that during all coming time it shall do the most good to the greatest number. I would have it a perennial blessing to the country and the world.

FIFTEENTH: I hereby order and direct the said Trustees of said Academy, and it is hereby made their duty in all loans of money which they shall make, as required by the fifth section of this Will, that the same shall be secured by mortgages on good productive Real Estate, at not less than twice its fair cash value of the amount loaned, without estimating the buildings or other appurtenances on the same, and I furthermore order and direct that in no case shall any of the money be loaned directly or indirectly to any one of the said Trustees of said Academy, hereby appointed, or any of their successors.

SIXTEENTH: I hereby direct that the Trustees of the several Boards herein created, shall be paid a reasonable compensation for their services while in the discharge of the duties of their office.

SEVENTEENTH: In case either of the two Trustees, first before named, shall die, refuse to accept the trust, or the office shall in any way become vacant, I authorize and empower the Trustee who shall accept the trust, to nominate in writing to the Judge of Probate of Wills, &c., for the County of Hampshire, some discreet and competent person to fill the vacancy, who being approved by said Judge, and having given bonds to his acceptance, shall succeed to all the rights, and exercise all the powers, and discharge all the duties of the Trustee who dies, or refuses the trust, as fully as if said Trustee, so nominated and appointed, had been named as Trustee in this Will, and as other vacancies occur they shall be filled in like manner and with like effect.

EIGHTEENTH: If it shall hereafter appear that any of the bequests, devises, trusts, directions, limitations, manner or terms of accumulations, or other provisions contained in this Will, cannot be executed, or shall be found repugnant to any rule of law, then and in such a case, I hereby devise and bequeath all my property, aforesaid, to my Executors, hereinafter named, to wit: Charles E. Forbes, of Northampton, and George W. Hubbard, of Hatfield, and to such Trustees as may be legally appointed in trust, to be held and disposed of as nearly according to the directions, purposes and objects, hereinbefore set forth and provided, as may be consistent with law.

NINETEENTH: I hereby appoint Hon. Charles E. Forbes, of Northampton, and George W. Hubbard, of Hatfield, the Executors of this Will, hereby revoking all Wills and Testaments and Bequests, by me heretofore made, and ratifying and confirming this and no other as my last Will and Testament.

In testimony whereof I hereto subscribe my name and affix my seal the day and year before written.

Signed, sealed, published and declared by the said Sophia Smith, as and for her last Will and Testament, in the presence of us, who at her request, and in her presence, and in the presence of each other, have here- unto signed our names as Witnesses.